In 2000, Jessica Miller came to Maine to put philosophy into practice. Her teaching and leadership on campus are well known. But perhaps her broadest and arguably most profound influence is as a clinical ethicist in the state’s health care communities.

Jessica Miller:
I think when people picture philosophy and philosophy professors, they think of ancient Greece and someone in robes walking around the marketplace pontificating.

One of the biggest misunderstandings about a philosophy degree is that it’s not practical. Actually, a lot of us are working in very applied settings. You can find ethicists on the board, involved in different corporations, in different nonprofits, in government.

For me, my avenue into practical ethics is clinical ethics. That is a field that is pretty new. It’s, maybe, 30 or so years old. It emerged in a period in American history, at least, when medical decisions became really complicated by a lot of different things.

One example would be technology. Having a new technology, like a ventilator, and not knowing when to turn it off, when somebody stops benefiting from that even though it’s keeping them organically alive.

The questions that we ask in health care and in medicine became in the ’60s and ’70s questions about, “What is it like to live a good life? How does my medical care fit into that question?” Instead of just, “What is the doctor telling me to do?”

You started to see theologians, philosophers, social workers, sociologists, psychologists, all kinds of people taking part in these ethical questions by creating hospital boards of ethics and other avenues.

What we’re finding in more and more medicine, this is an issue particularly for physicians and for nurses, is what we call moral distress. Moral distress involves feeling bad about what you’re doing, even though you’re told it’s the right thing to do.

An example might be a parent of a critically ill newborn who decides legally that they would rather help the newborn live its remaining days comfortably rather than doing a lot of extraordinary and invasive treatments.

While we all understand that that’s something a parent gets to decide in certain cases, it can be hard for a nurse who’s taking care of that baby. Maybe, if that were her baby or his baby, they would make a different choice.

What clinical ethics capacity does is it gives staff and patients, by the way, and families, a place to go to have these conversations about, “What is the right thing to do? What are we doing here?”

There are these different options. They have different virtues, different moral goods. We can’t have both. Do we minimize suffering, or do we prolong life? These kinds of questions.

We can philosophize about anything. If you’re reflective and thoughtful about something, you’re doing philosophy about it. For example, I just wrote an article on death in Disney. I know, way to bring you down, but actually it’s fascinating because there are numerous deaths in Disney animated films.

If that’s the way somebody is going to get interested in philosophy, because they love Disney, great. I will take it.

For me, what is most rewarding in all of the work that I do is bringing the discipline that I love and that I spent my life studying to people who, maybe, won’t spend their life studying it.

They’ll be introduced to it, have an appreciation for it, and bring it into their lives.

One of my favorite things is to be in the community and run into a nurse that I taught at the University of Maine, or a social worker who took my ethics class, or a pre-med student who took my bioethics class.

They remember me, but more importantly, they remember what we did in the class. They have in some ways, sometimes, a new appreciation for that time they had at the University of Maine when they could sit in a class and spend an hour thinking about designer babies and whether that’s something we should do. 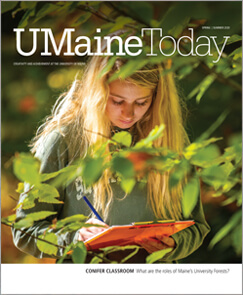