Julie Gosse caps a decade of research into troublesome triclosan
by Marcus Wolf
Photographs by Adam Küykendall
In the Gosse lab, molecular and biomedical sciences graduate student Bright Obeng continues to conduct research on chemicals that have significant impact in the cellular pathway of immune cells.

Julie Gosse caps a decade of research into troublesome triclosan

University of Maine toxicologist Julie Gosse spent a decade unearthing the medical harm posed by the germ-fighting agent triclosan (TCS). Manufacturers had included the synthetic chemical in soap, toothpaste, facial cleansers, sanitizer and other common products since the 1970s, when no research delved into its health and toxicological effects.

By the time Gosse and her students began investigating it, 75% of Americans were exposed to it, according to the National Health and Nutrition Examination Survey. 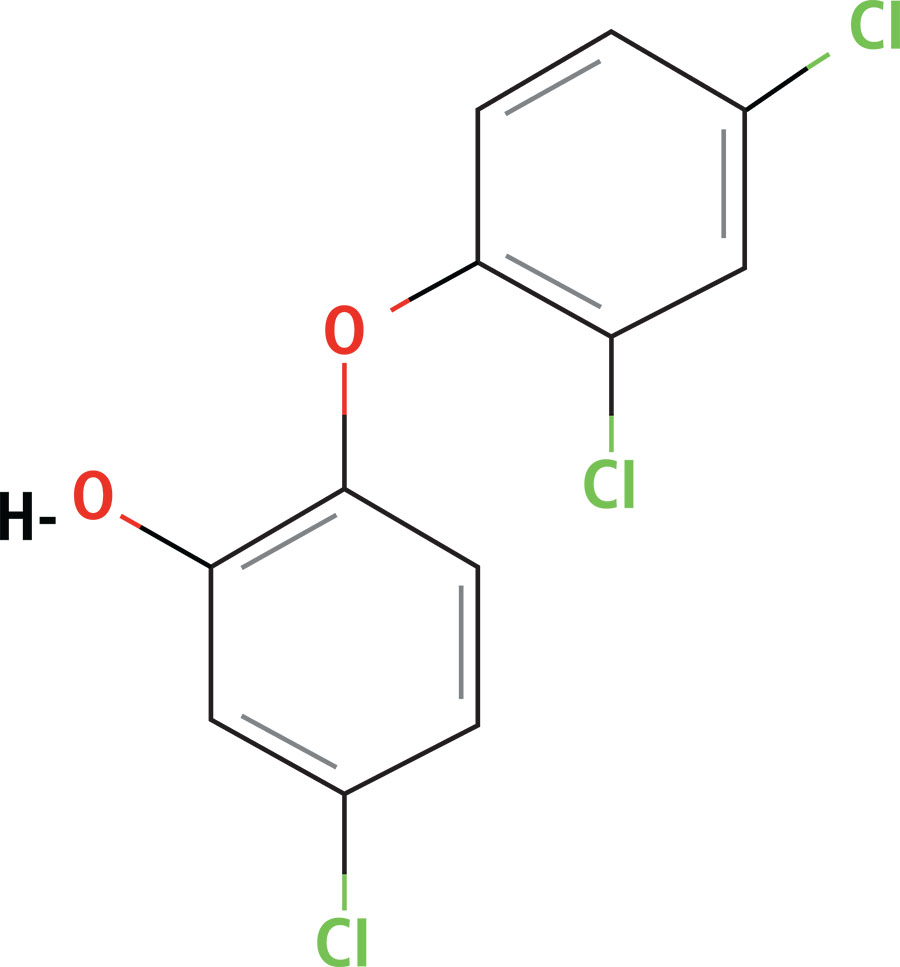 Various studies in the past 10 years have revealed that TCS weakens disease resistance and interferes with various bodily functions. Research led and overseen by Gosse, an associate professor of biochemistry, found TCS inhibits immune cells, particularly T and mast cells, and damages mitochondria. Investigations from other toxicologists and experts also found that TCS can harm human fertility, development, cognitive and thyroid function.

Growing scientific evidence from Gosse and other scientists inspired public outcry against TCS and government intervention. The U.S. Food and Drug Administration (FDA) banned TCS from bar soaps, liquid soaps and body washes in 2016, hospital soaps in 2017 and hand sanitizer in 2019.

The chemical has since been removed from almost all products.

When Gosse wrapped up her TCS research with a final paper, she sent two graduate students to the grocery store to search for any goods with it. They found none.

“I think the public became aware of triclosan’s toxicity, so the decision was really made by consumers,” says Gosse.

The now controversial antimicrobial agent was not on the UMaine toxicologist’s radar until she watched a presentation by Environmental Protection Agency scientist Susan Richardson, hosted at UMaine. Richardson noted that the antimicrobial agent resembled a dioxin. Despite experts producing virtually no toxicological literature for the chemical, it had become widespread, which Gosse and Richardson found troubling.

“Here we have a chemical to which the vast majority of Americans are exposed, and we have no idea what it does to their health,” Gosse says.

Rachel Kennedy, then a graduate student in Gosse’s lab, searched for medical literature about TCS. She found only a couple studies pertaining to the chemical’s ability to disrupt cells in the endocrine system. Gosse and her students were studying endocrine disruptors at the time, so Kennedy delved deeper into TCS.

The work conducted by Kennedy, her colleagues and Gosse resulted in the UMaine researchers’ first study into the antimicrobial agent, which concluded that TCS suppresses mast cell function. Kennedy, who was first author on the paper and received her Ph.D. in 2013, is now CMO transformation and communication lead for EMD Serono Inc. in Rockland, Massachusetts.

“Ever since,” says Gosse, “we’ve been trying to figure out the exact biochemistry that causes that cellular disruption.”

The study launched a series of investigations into TCS from Gosse’s lab. They found out how the antimicrobial agent suppresses mast and T cells, particularly mast cell signaling, and that it damages mitochondria in immune and nonimmune human and other organism cells.

Funding sources for the research included the National Institutes of Health, the U.S. Department of Agriculture, Maine Agricultural and Forest Experiment Station, and Pharmaceutical Research and Manufacturers of America Foundation.

Lisa Weatherly, then a Ph.D. student of biomedical sciences from the Graduate School of Biomedical Sciences and Engineering, led a study from Gosse’s lab that revealed how TCS as a toxicant harms mitochondria. Weatherly also was the first to use super resolution microscopy in the field of toxicology, in particular, the fluorescence photoactivation localization microscopy (FPALM) technique developed by UMaine professor of physics Sam Hess.

Gosse says without Weatherly’s hard work, several papers may not have been produced. The former UMaine student now serves as a researcher at the Centers for Disease Control and Prevention National Institute for Occupational Safety and Health in Morgantown, West Virginia.

“We wanted to continue studying this as long as people continued to be exposed,” Gosse says. “If you know what a chemical does, the causes and effects, you might be able to predict what the next chemical with a similar structure will do.”

TCS is intended to slow or stop bacteria and mildew growth. Incorporating it into numerous products for the majority of Americans to consume resulted in TCS becoming less effective, Gosse says. Bacteria had grown resistant to the chemical, making its implementation useless in many goods while still posing health risks.

Rather than banning TCS outright, the FDA tasked companies with proving that its inclusion provided benefits. When companies declined to demonstrate the benefits of TCS in their goods, the FDA forced them to remove the chemical.

Colgate-Palmolive was able to keep TCS in its Colgate Total toothpaste after demonstrating that the product can combat gingivitis better than products without the antimicrobial agent. Public pressure eventually prompted the company to remove TCS from its product.

Gosse says the benefits of Colgate Total for consumers with gingivitis outweighed the risks, but likely not so for other users. The toothpaste, she says, should have been marketed only to people with the disease.

After years of investigation, Gosse and her colleagues determined why TCS inhibited immune cell function. They knew the antimicrobial agent stifled the inflow of calcium into the cell cytoplasm, a necessary function for immunity, but lacked the findings to define how it occurred.

A team of scientists, led by then UMaine master’s student Suraj Sangroula and then UMaine undergraduate student Alan Baez Vasquez, found, to Gosse’s surprise, that TCS is acidic. The chemical releases enough acid to deform the calcium channels leading into the cytoplasm in immune cells. That prevents them from transporting calcium and, therefore, from responding to various threats such as pathogens, allergens or inflammation.

The study also revealed new details about the biological pathway calcium follows throughout the cell. Toxicological studies can reveal information about basic biology, creating knowledge beyond the mechanism of a single toxicant. Gosse says by understanding how a chemical affects users, scientists can begin to predict how others with similar structures may act to prevent future harm.

Sangroula, Baez Vasquez, Gosse and their UMaine colleagues were joined by former student Juyoung Shim, now an assistant professor of biology at the University of Maine at Augusta. Toxicology and Applied Pharmacology published a paper describing their findings in the October 2020 issue.

It was the eighth published research paper on TSC from the Gosse lab.

The U.S. Food and Drug Administration (FDA) banned TCS from bar soaps, liquid soaps and body washes in 2016, hospital soaps in 2017 and hand sanitizer in 2019.

“They really did the precision experiments to prove (their hypothesis),” Gosse says of Sangroula and Baez Vasquez. “Their experimental data replicated the exact conclusion drawn from their theoretical calculations.”

Their findings provided knowledge that informed everyday people, assisted in government decision making and trained a new generation of scientists and other professionals, all of which Gosse says are crucial services from a research institution.

Many of Gosse’s former and current students use skills they learned in the lab to excel in later academic studies and careers in pharmacology, biotechnology, medicine, teaching and other fields. Senior Bailey West, for example, is the recipient of the Society of Toxicology Undergraduate Student Research Award.

After leading the final TCS study from Gosse’s lab, Sangroula graduated and now serves on the front lines of vaccine production for COVID-19. She works as a pharmaceutical validation engineer for Verista.

Baez Vasquez enrolled in Harvard University’s molecules, cells and organisms program as a Ph.D. student after graduating from UMaine.

Students who succeed in Gosse’s lab prove to be naturally hard workers with the patience and dedication needed to complete challenging experiments that lead to answers to hard-hitting questions. Gosse says she considers her students research partners, some who unveil findings she may have overlooked while performing other duties.

“We are now moving on to study new chemicals of interest, to which people are widely exposed, but for which there is little or no published toxicological or epidemiological data,” says Gosse, who is working with graduate student research partners Bright Obeng and Sasha Weller, and several undergraduates including West.

“The overarching goal of toxicology research is to protect human and environmental health.”

Expertise, infrastructure and partnerships key to the effective response of the state’s research university in the pandemic by UMaine Today
Next: Education

A focus on learning to engage students where they are — and wherever they are, whether on campus for in-person classes or remote, a hybrid of the two or fully online by UMaine Today