Reading Shakespeare in high school, Jessica Miller found herself thinking deeply about the Macbeth character, especially her moral responsibility for her husband’s, and her own, evil actions. When does persuasion become coercion? When does madness minimize free will?

Then came Zen and the Art of Motorcycle Maintenance.

Miller was a political science major at Boston College when she took a philosophy course. What she heard — and read — got to her innate interest. Zen asks, what is the difference between our perception of reality and reality itself, and why do we assume there is one? She double-majored, then went on to pursue a doctorate at the University of Connecticut, focused on contemporary moral philosophy. 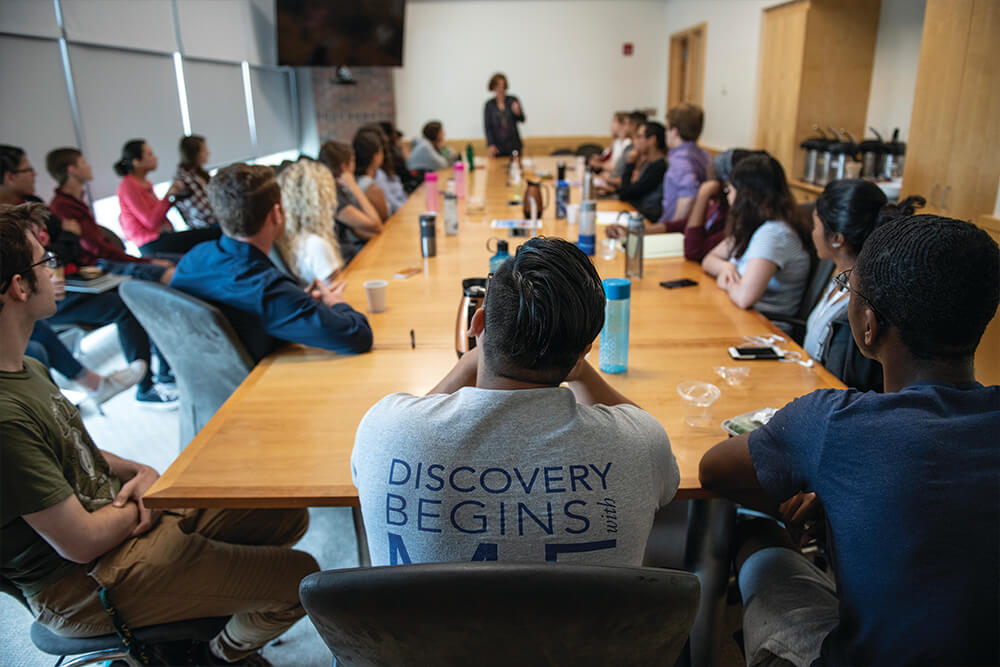 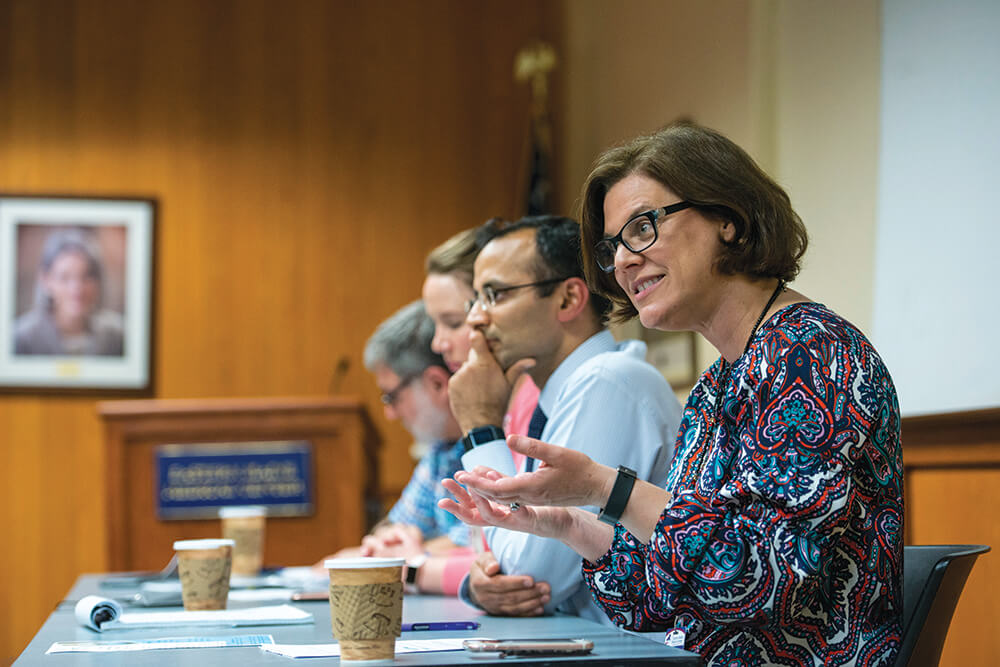 Left, Miller talks biomedical ethics at The Jackson Laboratory in Bar Harbor, Maine with high school students enrolled in the summer program funded by the National Science Foundation and National Institutes of Health. Right, Since 2007, Miller has been the clinical ethicist at Northern Light Eastern Maine Medical Center, where she collaborates with medical staff, and patients and their families. Her work includes serving on a panel for the hospital’s bioethics grand rounds.

She came to Maine to put philosophy into practice.

“I felt like the questions being asked were important and vital,” says the chair of the University of Maine Department of Philosophy of those early influences and what she still loves about philosophy. “And I wanted to contribute to the conversation.”

Miller teaches philosophy courses for majors and nonmajors, where they discover the discipline — and themselves. Most nursing and pre-medical students end up taking one of her ethics courses. Her research focuses on ethics, bioethics and feminist theory, including the theory of trust. Recent writing has included how to break bad news to families in the pediatric intensive care unit, as well as analysis of how death is depicted in contemporary Disney films.

But her widest — and, arguably, her most profound — influence is as a clinical ethicist in Maine. Since joining the UMaine community in 2000, Miller has been an active health care ethics consultant and educator. Since 2007, she has been the clinical ethicist at Eastern Maine Medical Center (EMMC) in Bangor, Maine. Miller helped establish EMMC’s Ethics Advisory Committee, which has been cited as a model for regional hospitals in the United States. It includes a formal ethics consultation service that Miller chairs.

This past summer, Miller and Dr. Jonathan Wood of EMMC presented a 10-year data analysis of the hospital’s ethics consultations at an international conference at Oxford University in England. And this fall, Miller was a panelist at a Boston University forum, Humanities Approaches to the Opioid Crisis.

“An underlying thread is the importance of philosophy — taking a moment to think about what life is all about and why we’re here,” Miller says. “What does happiness mean to us, and how are health and happiness connected? What decisions do I need to make in terms of what I value?

“Whether talking genomics or distribution of health care resources or end-of-life decision making, your body and your health are inescapable in pursuing happiness.”

Mention philosophy and for most people, images of the bearded philosophers of Ancient Greece pontificating in the marketplace come to mind. Today, philosophers are still in public arenas, Miller says, but now that engagement with society is in K–12 education, medicine, government, corporations, environmental issues and so much more. Public philosophers are students of community knowledge, learning as much as they teach.

The field of clinical ethics, which helps patients, families and clinicians address ethical issues that arise in health care, emerged in recent decades as medical decisions became more complex in an increasingly technological society. Those questions can range from when to stop aggressive medical intervention to whether expressed breast milk from a patient who uses medical marijuana should be given to her baby in the neonatal intensive care unit.

As a clinical ethicist, Miller provides training and consultation for physicians, nurses and other medical personnel. She also may be called on to consult with patients and their family members. Unlike urban areas where a city hospital may have a whole department devoted to clinical ethics, rural health care settings often struggle to find such philosophy-focused resources.

"What’s most rewarding in all the work I do is bringing the discipline I love to people who won’t spend their lives studying it.” Jessica Miller

That’s why Miller does what she does in Maine.

“Clinical ethics consultation provides a safe space for medical professionals, patients and families to have honest conversations about what is the right thing to do — presenting the different options, each with different virtues and moral goods, often having to do with minimizing suffering or prolonging life,” Miller says.

“I like to think of it as ethics mediation,” she says. “We have good people who are trying to do the right thing, and they don’t agree on what it is. The focus is on the process and not the ‘right’ answer. It involves listening to all and coming to an agreement that reflects participatory engagement, fairness and justice. The goal is to move forward with the next right thing for that patient.”

The importance of Miller’s clinical ethicist work and the leadership of EMMC in this field are underscored in the 10-year longitudinal study — one of the few focused on rural health care — presented at the 14th International Conference on Clinical Ethics Consultation in England. Three findings in the Maine study are particularly revealing.

While physicians were the heaviest users in the early years, over time, nurses increasingly tapped into the clinical ethics services. The decade of data also shows that there were more ethics consultations related to patients in their 50s and 60s — ages when people are “collecting chronic conditions” — than for those at the beginning or end of their lives.

Top, it was standing room only for Miller’s public talk on the ethics of genomics at Jesup Memorial Library in Bar Harbor this summer. Topics included the popular DNA ancestry test kits on the market. Bottom, on a warm September day, Miller’s new one-credit philosophy course called Character, Career and Happiness took to the Mall. The course is designed to help first-year students and undeclared majors fully engage in the UMaine experience.

And among the leading dilemmas faced by the clinical ethics team: locating and working with the appropriate decision-maker when the patient lacks decision-making capacity.

“Doing clinical ethics in a rural environment is different than in an urban environment, thanks to geography, resources and culture,” says Miller. “It’s important that the voices of rural bioethics are heard nationally.”

Miller says she enjoys engaging with diverse groups — from UMaine students in class to high school interns in a summer program at The Jackson Laboratory in Bar Harbor, Maine to older community members attending her lecture on personal genomics at a local library. And medical professionals, and patients and their family members.

“What’s most rewarding in all the work I do is bringing the discipline I love to people who won’t spend their lives studying it,” she says. “But they can be introduced to philosophical perspectives and tools, gain an appreciation for them and bring them into their lives.”

“What I hope is that people will have a little more thoughtfulness about where their beliefs and values come from, and more understanding of those whose beliefs differ from our own.” Jessica Miller

This semester, Miller introduced a new one-credit philosophy course called Character, Career and Happiness, designed for first-year students and undeclared majors. Students inventoried their skills, challenges, virtues and interests, and explored how to those match their skills with their definition of happiness, or a flourishing life. They read what Aristotle and John Stuart Mill had to say about happiness, as well as some contemporary positive psychology.

The goal by semester’s end was to encourage the students to fully engage in the UMaine experience and “take ownership of a coherent academic plan that honors their strengths, accommodates their challenges, and fits with their values and aspirations.”

The class was overenrolled with 27.

“I teach a lot of first-year students, and a lot of majors in other disciplines,” she says. “That’s why I have to meet them where they are. I can’t say, ‘here’s this grand, important tradition.’ I have to start with what is of concern to them in their lives, and show them that philosophers have interesting things to say about the human condition. I really want philosophy to come from students, not be imposed on them.” 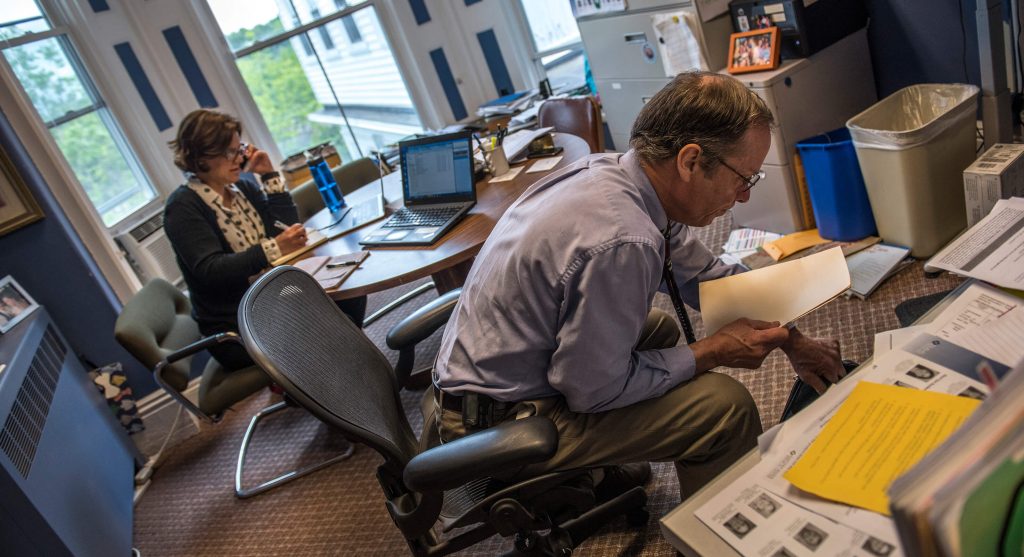 Miller and Dr. Jonathan Wood prepare to present their 10-year study — one of the few focused on rural health care — at the 14th International Conference on Clinical Ethics Consultation in Oxford, England this past June.

Philosophy provides tools for students, health care practitioners and members of the public to question their assumptions, and to critically assess information that’s presented to them.

“In today’s world, people are bombarded. It’s an information fire hose filled with facts, ‘alternative facts’ and outright falsehoods. But philosophy can help with critical awareness of what is worth grabbing,” Miller says. “What I hope is that people will have a little more thoughtfulness about where their beliefs and values come from, and more understanding of those whose beliefs differ from our own.”