In May, as their peers celebrated Commencement at the University of Maine about 125 feet above sea level, Laura Mattas and Heather Clifford marked the occasion at Mount Everest’s Base Camp — at 17,514 feet.

They were on the world’s highest mountain conducting research for the National Geographic and Rolex Perpetual Planet Extreme Expedition.

Mattas, an undergraduate, and Clifford, a graduate student, didn’t wear traditional caps and gowns for the May 11 ceremony. Other items had priority in their backpacks for the multiday hike to Base Camp.

So the explorers improvised. Trash bags became robes, cardboard and duct tape made sturdy mortarboards, and yellow electric tape turned into tassels. Clifford draped a yellow jacket over her shoulders to signify her graduate hood. 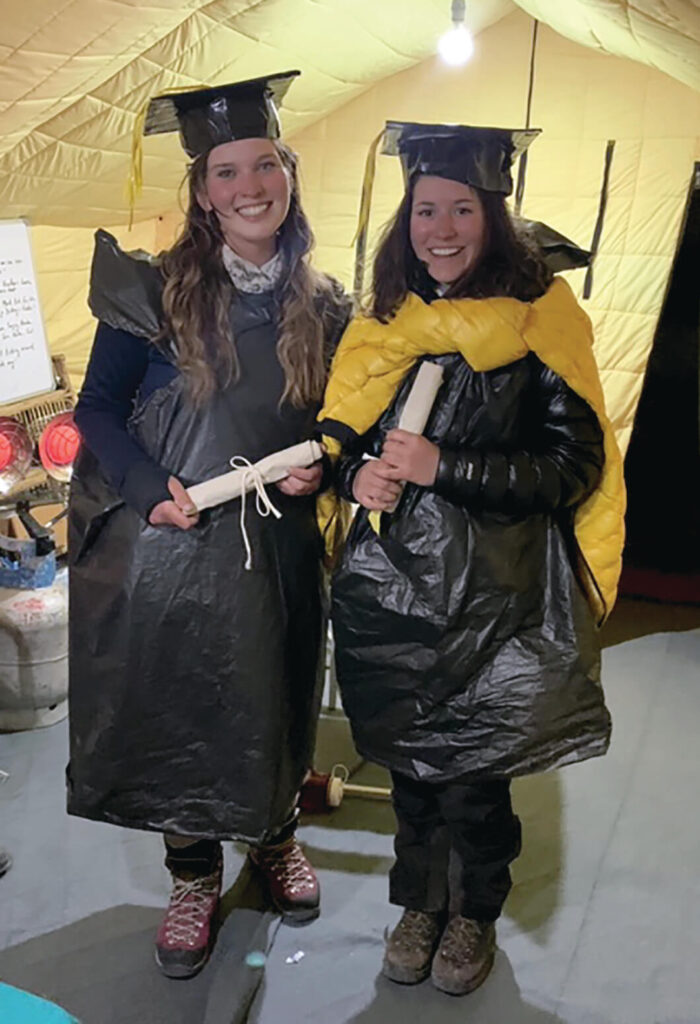 And when “Pomp and Circumstance” started playing on an iPhone, Clifford and Mattas stepped through the flap of an insulated yellow dining tent.

Among the distinguished guests were Sherpas; UMaine colleagues, including Mariusz Potocki who collected the world’s highest-altitude ice core; and National Geographic science team members, including Tom Matthews and Baker Perry, who installed the two highest weather stations on Earth.

Guests had assembled for dinner around a table laden with insulated Hydro Flasks, ketchup bottles, hand sanitizer, instant coffee, a small lantern and bowls of soup.

And a congratulatory vanilla cake.

Paul Mayewski, director of the Climate Change Institute, and expedition leader and lead scientist, said the graduation ceremony on Everest was almost certainly a first for UMaine, maybe the world.

He also announced that Clifford and Mattas were valedictorians of their respective classes.

“We searched all over the Khumbu Glacier. We couldn’t find anybody who had as high grades, was from the University of Maine and was on Mount Everest,” he said during the ceremony.

Mattas, who studied Earth sciences with a concentration in climate sciences, has already conducted deglaciation research on Everest and in Antarctica, New Zealand and Iceland.

“I’m glad my eyes are bloodshot from altitude rather than studying for finals,” she said after accepting her temporary diploma — a cloth bag used to collect rock samples.

She’s now pursuing a master’s degree in Quaternary and climate studies with the Climate Change Institute. And Mattas, a native of Glenville, New York, says she’s always had her head in the clouds.

“I grew up playing in the great outdoors of the nearby Adirondack Mountains and was curious about the way storms traveled and passed through the mountains, how the mountains and valleys formed (and) what damages were being caused by acid rain.”

After the ceremony, guests signed the diplomas, which Clifford called an incredible expedition souvenir.

Clifford earned her master’s degree in Quaternary and climate studies, with a concentration in ice cores and data analysis. While at UMaine, the native of Sandwich, Massachusetts also has conducted research in the Peruvian Andes, Swiss Alps and Greenland.

For her doctorate at CCI, she’ll examine snow and ice from these high mountain regions, and seek to solve problems related to pollution and climate change.

“These two valedictorians have raised the bar to new heights,” said Aaron Putnam, assistant professor in CCI and the School of Earth and Climate Sciences, at the conclusion of the ceremony. “They’re clearly our top students, in so many ways, and they are just pushing the field to new heights. And we couldn’t be more proud of them.”